A downloadable game for Windows

Welcome to the Dead of Night Prototype / Alpha page.

Check out the full game at:

This page is here to show how Dead of Night has progressed in the 3 years that it was in development.  A lot of work was put into the game and loads of stuff had to be cut as there was not enough time to implement it all.  Also, as it was my first game, I got a little ahead of myself and wanted there to be more puzzles and more for the player to do other than it being the game that it is today.

The development document that I am putting up for download describes all the ideas that I had originally intended for Dead of Night, but again my naivety got the best of me, and I had to take a step back and figure out exactly what I wanted for the game.

So what game did I want to make?  I am a big fan of the Commodore 64 - at the time it had fantastic graphics and the music that the composers could produce with it would stand the test of time.  Looking through the various videos on Youtube and listening to the soundtracks I landed on Spike in Transylvania - a semi-isometric 2D flipscreen puzzle adventure by Genesis Software and produced by Codemasters, who at the time produced a good few flip screen adventures that I was a fan of(the Dizzy / Seymour games being other good examples).  Then it hit me...  nobody makes games like these anymore...

I needed a character and setting, and I always find the idea of the anti-hero / villain being the main character being more interesting than just a good guy getting rid of some evil thing - it gets a little boring after a while.  The story of Spike in Transylvania is that Spikes comrades were captured and locked up in Dracula's castle and you, as Spike, had to rescue them.

But what if you were Dracula? (Not Dracula himself, I don't want Bram Stokers estate coming after me for copyright infringement!).

And so the idea of Vlad was born!

It had been a long time since I did any programming or art - It was in my GCSE years that I was big into drawing, and after leaving high school I went to further education in order to learn programming, and that was the last time I did any serious coding.  The first thing I wanted to do is get an idea of what the game would look like, so I invested in a great little program called Pyxeledit for making the first few screenshots.

The next thing was to figure out how to make a game.  And also figure out which engine to use.  Unreal was out of the question - I don't need 3D, and Unity seemed a little too complicated.  GameMaker was my engine of choice.  It specializes in 2D and seemed to be the easiest engine to learn.

Youtube is awesome for learning.  If you want to learn how to code in any language Youtube is a great place to start.  Shaun Spalding has a great selection of videos to help you code in GameMaker, so a big thanks to Shaun and his videos.

I had managed to get Vlad in, control him with the arrow keys and become blocked by collision objects and move between rooms!

Basically the same layout as the first.  Added a dark filter and basic lighting to get the nighttime effect.  People were added as well, but coding AI at this point was not going to happen, so I just made them walk from left to right.  They would not go into the different screens - every screen is a room in gamemaker, and every room is treated as a level, and this is the one thing that ended up being the biggest time sink by the time the game became Beta.  But more on that later... 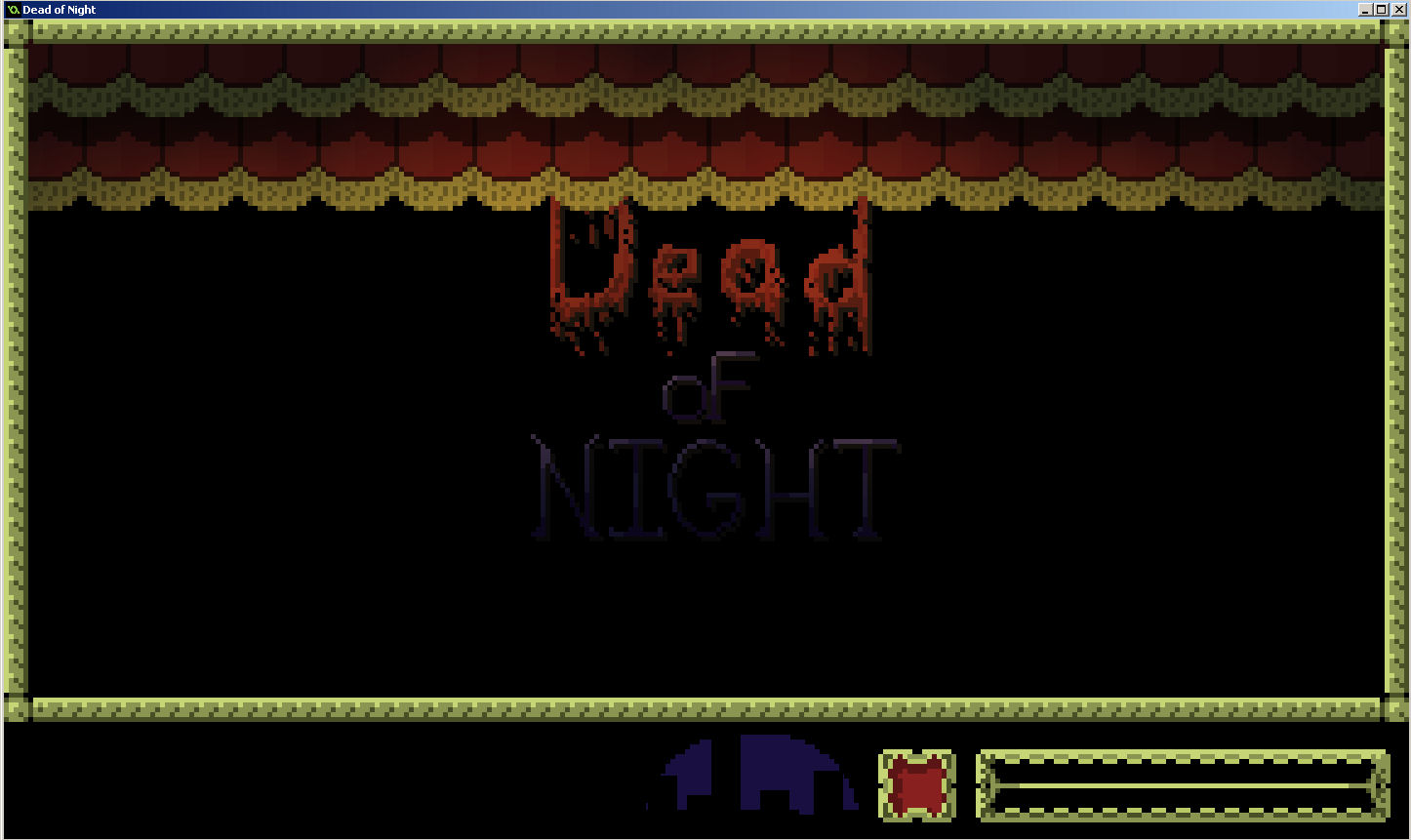 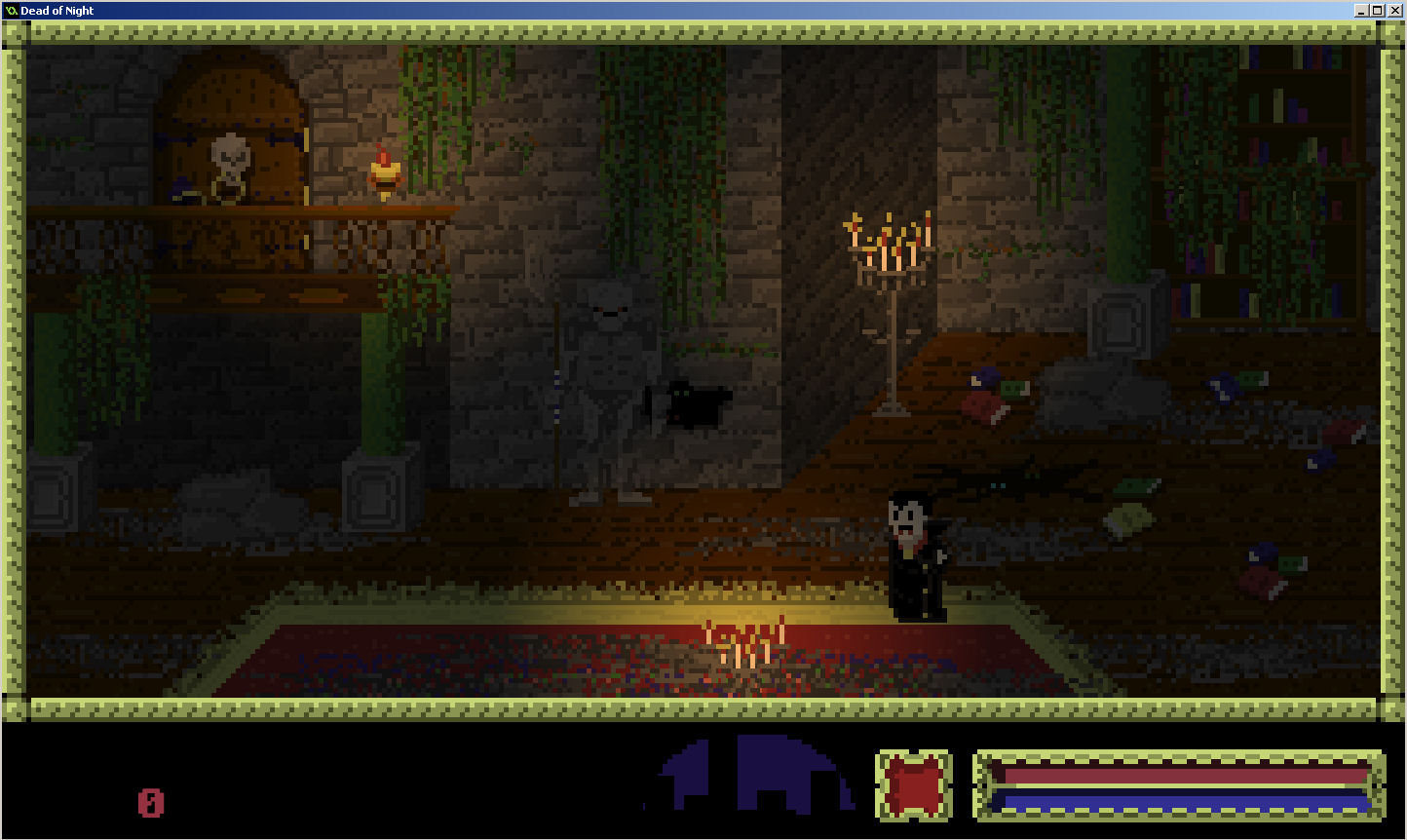 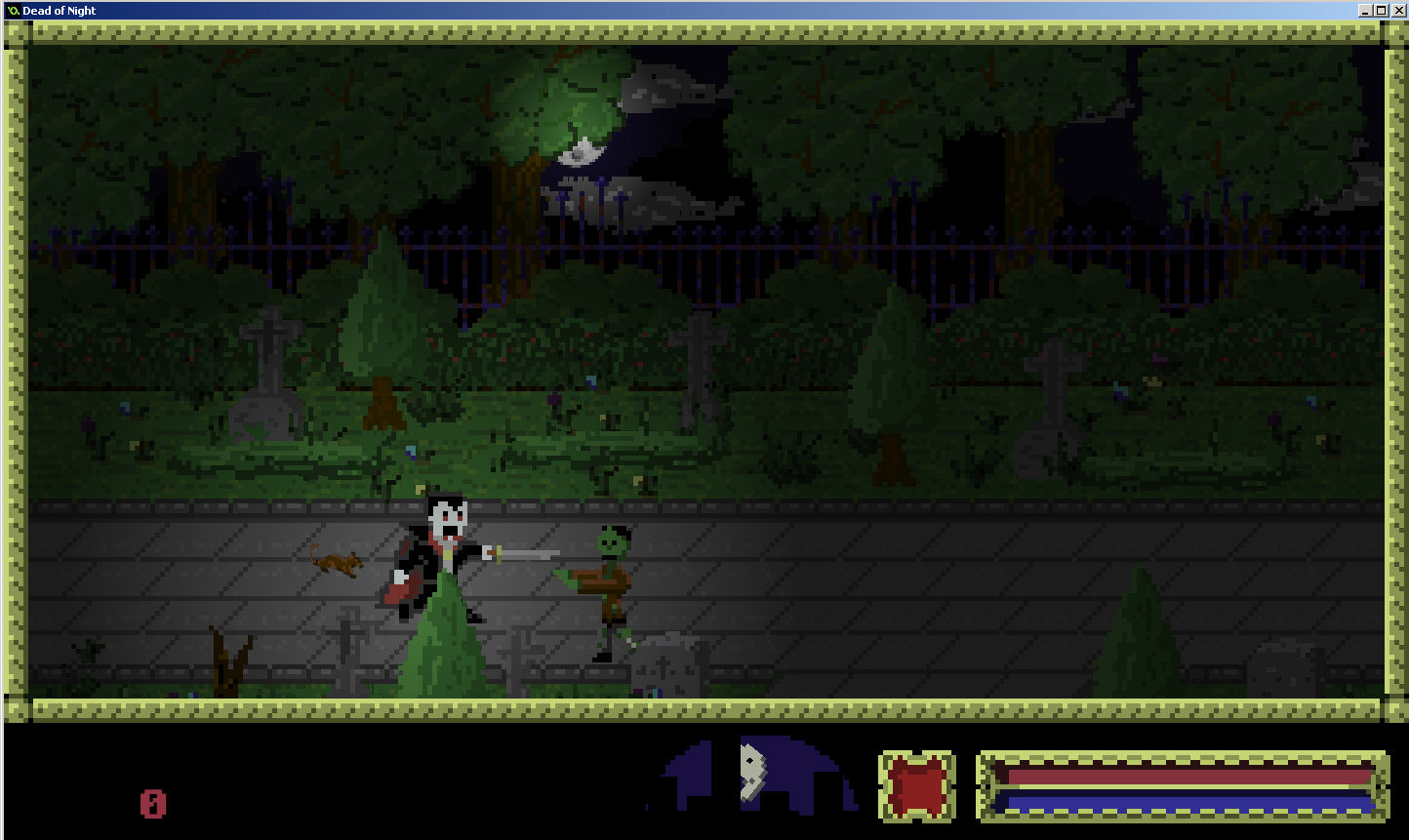 Now we're starting to get serious!  The title screen is in with a natty curtain.  The basic hud is now in with a working health / mana bar, and the time display works (with a moon and smiley faced sun!).   The idea of having a score system was in, 100 points for every death, and you were able to attack people with a sword!  Also ZOMBIES!!!  The lighting system is looking a lot better than the prototypes as it uses a different shader engine.  The moon in the background was going to be used as well, but I was unable to figure out a way to make the light work properly with it, so it was scrapped early on.   The areas included are a park (where you start when the ferryman brings you over to the mainland), a housing estate, a town area with sewer access (the sewers are broken - going through doors leads to the wrong point in the next room), the graveyard with zombies and forest.

People walking about is now in the game, but it's not in any way perfect.

Like I said earlier, every screen is a room, and gamemaker treats every room as a level.  People had to have their own array in order to store and manipulate their coordinates and also the room they are in.  So in order to get people walking about, you have to add a certain amount to the objects X/Y position.  Once the object gets to a certain X position, destroy the object and change the room they exist in in their array.  It was very complicated and it was a silly thing to do looking back.

So things are getting better, but the layout was annoying me... 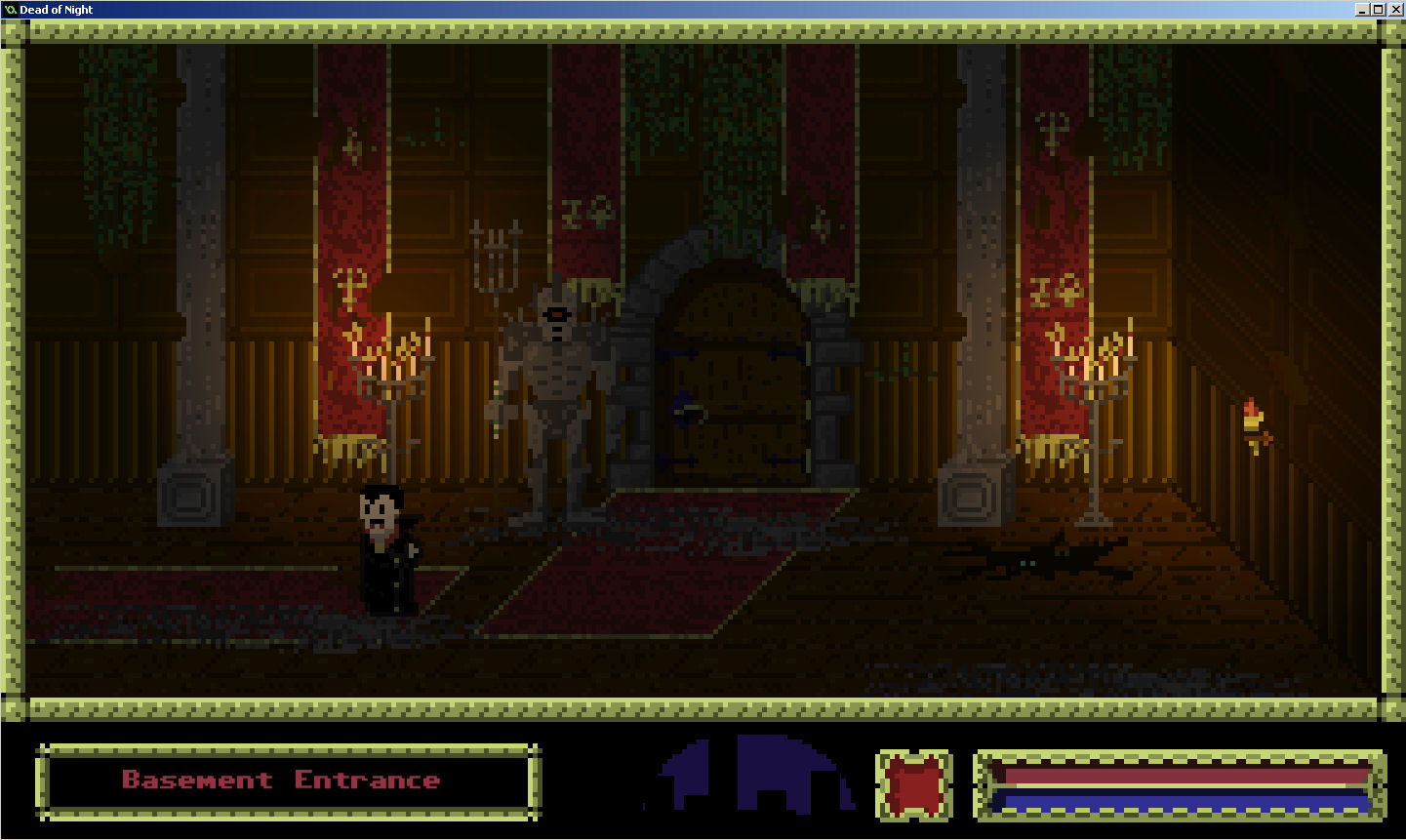 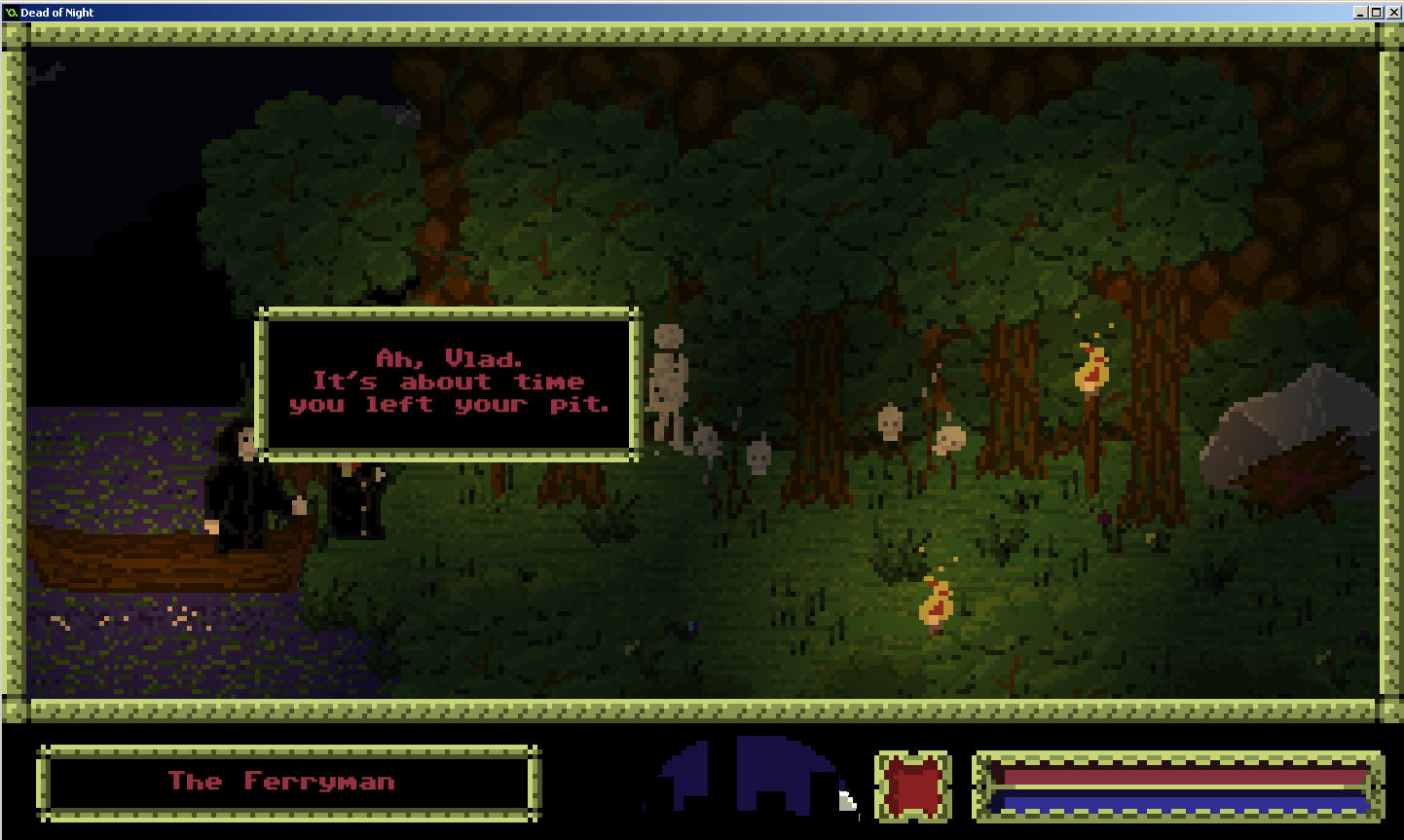 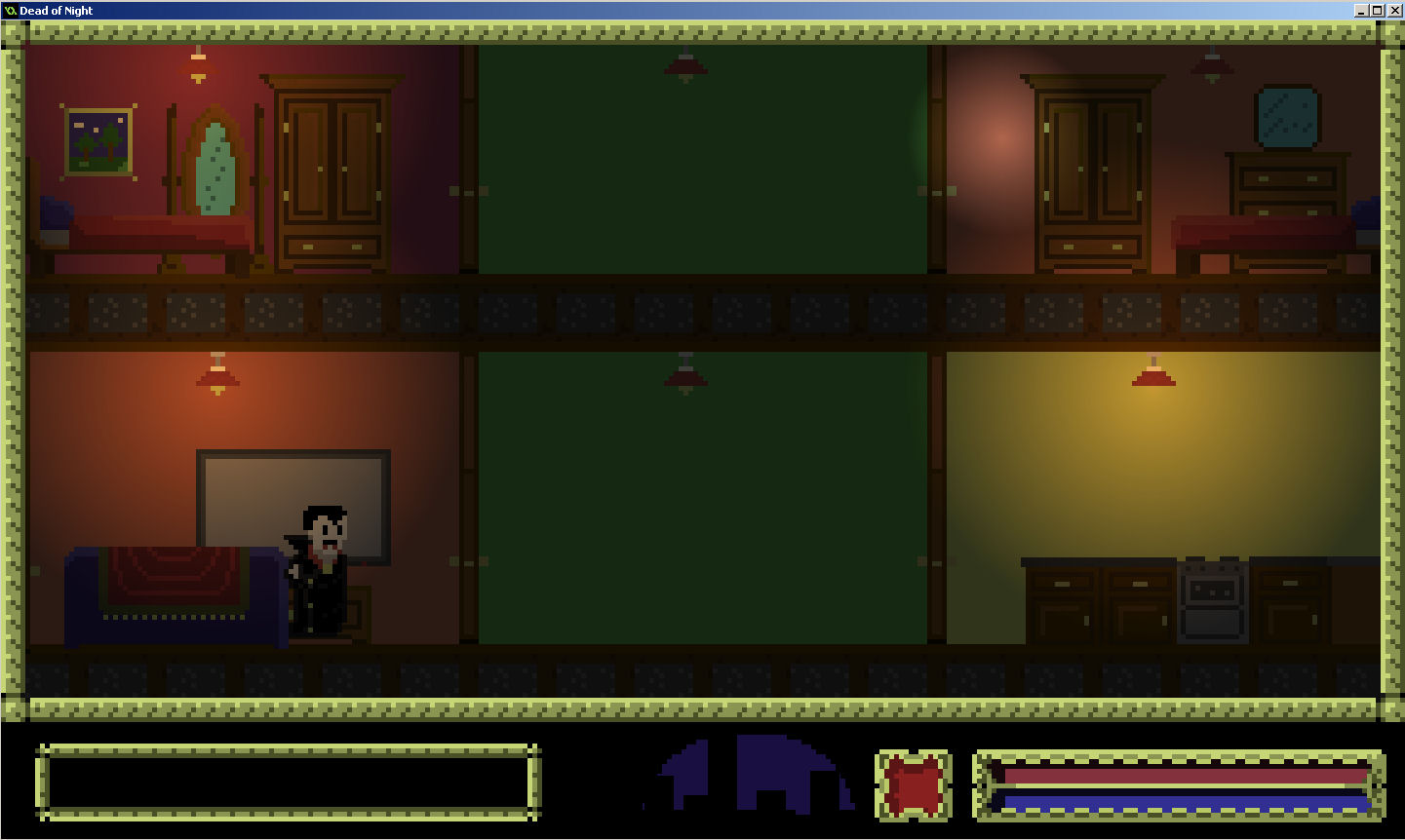 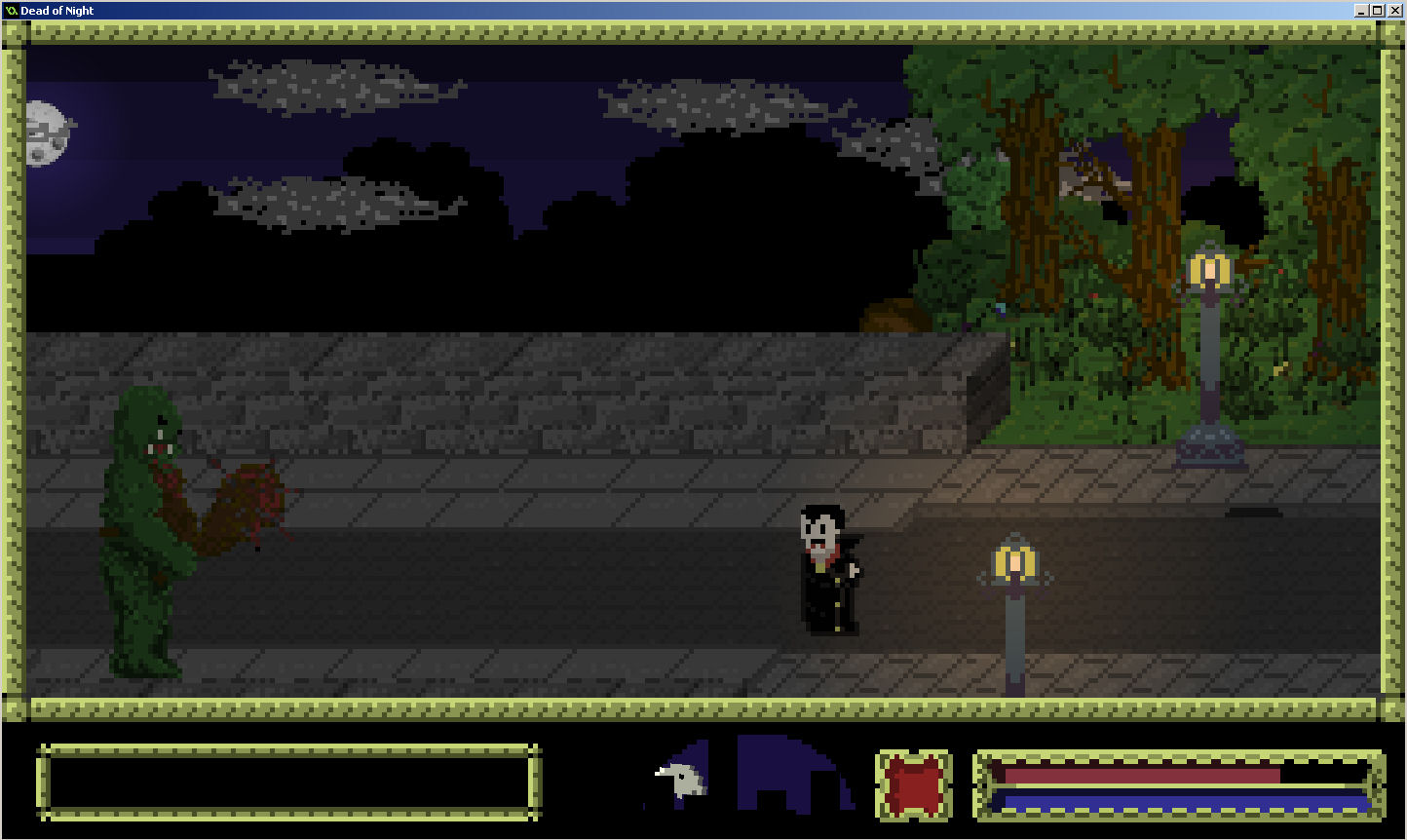 More things added.  The score system was scrapped as it served no real purpose.  The layout of the castle had changed a little bit as well, graphics being the main thing to be changed.  Starting to work with dialogue boxes as well.  A few extra screen were added and changed, the bridge being one of the main ones with a troll that would not let you passed until you get a goat that was to be freed from the cult followers.

There was also the idea that you could convince people to let you into their homes and you would have to find an object or kill someone to get an object, but the view would be in a 2D platformer view. 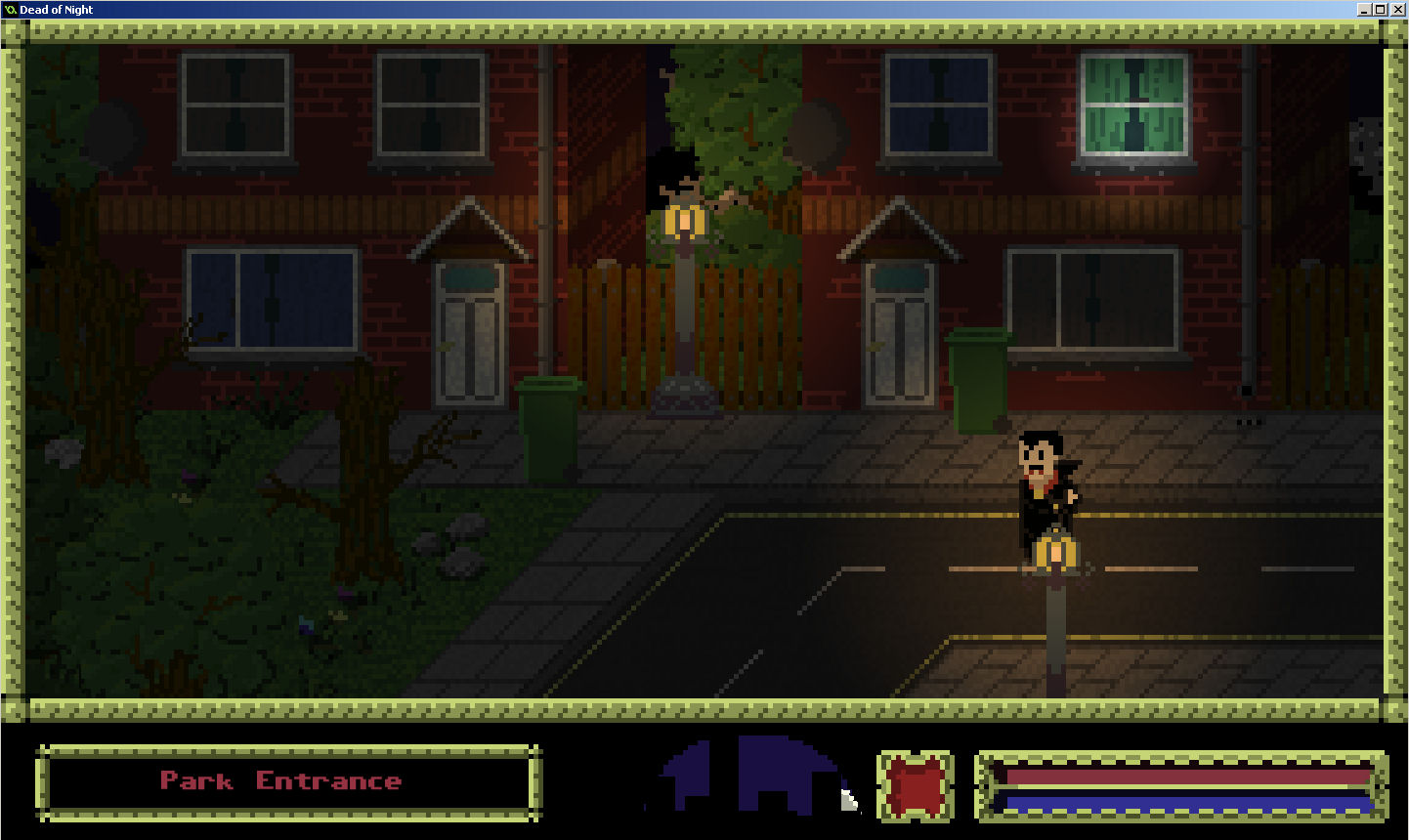 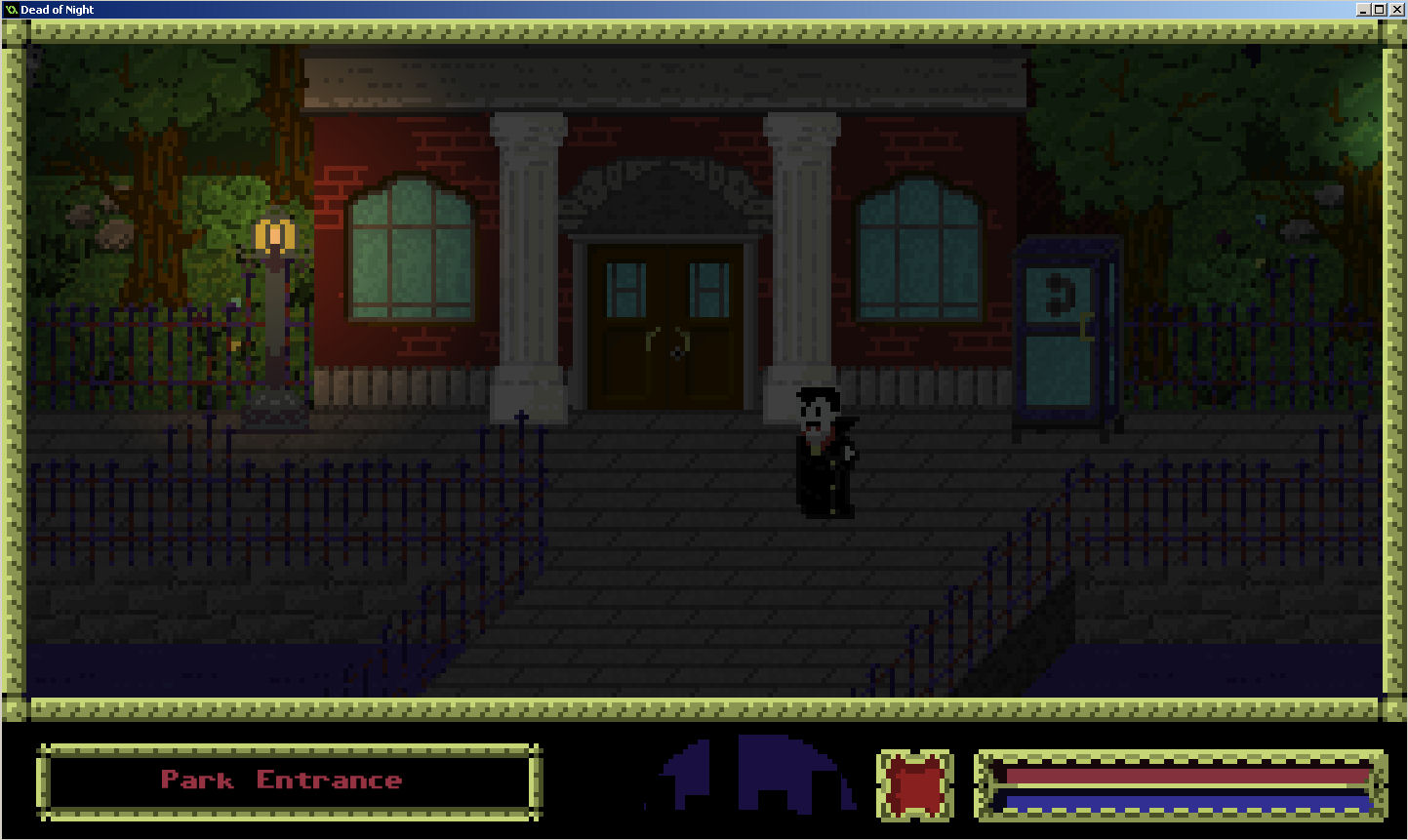 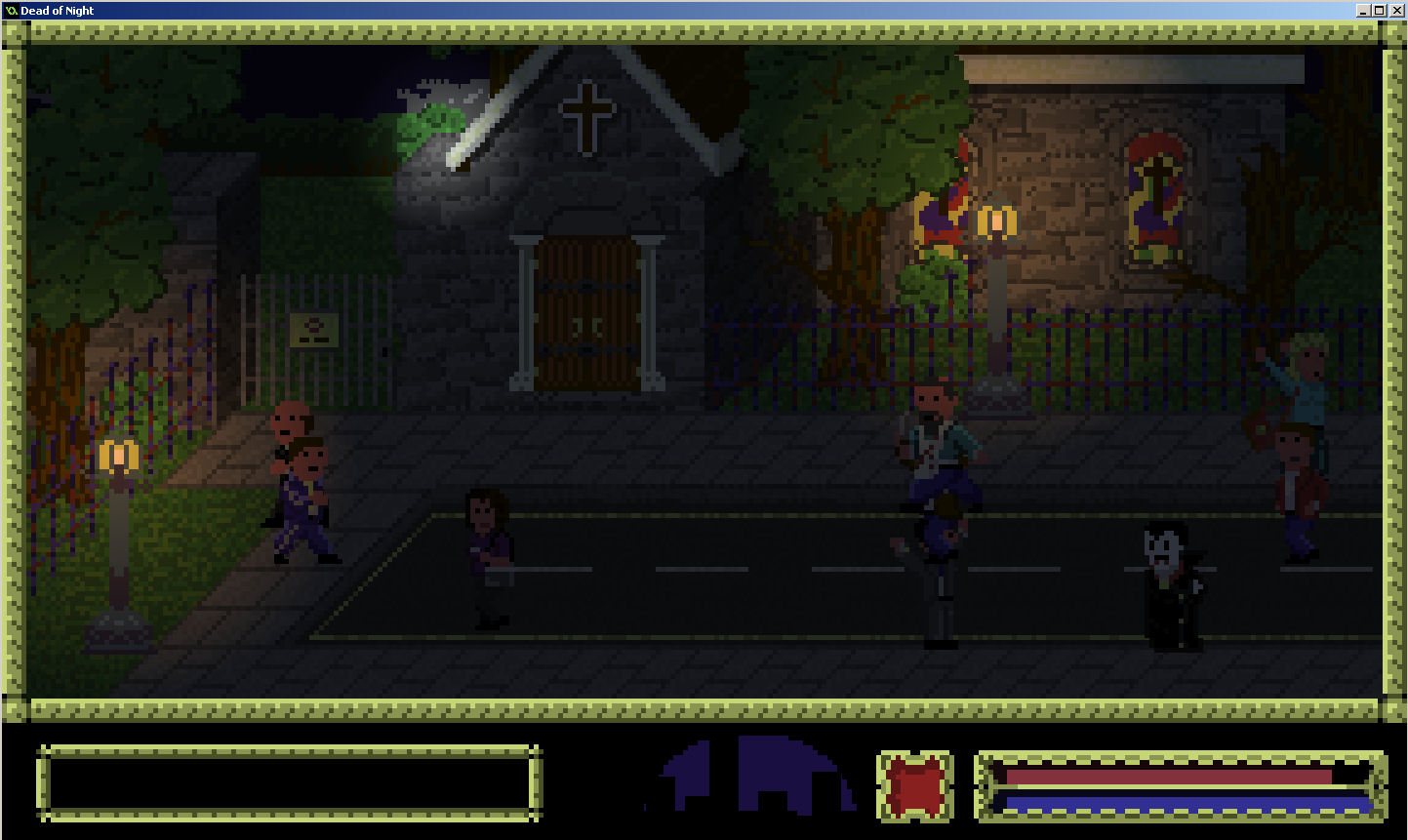 The layout is being changed as this point, and would be the basis for the final layout for the BETA and final version.  Graphics were updated / changed and then things took a turn for the worse...

One thing people don't really hear about is the mental issues that can affect you when you are doing this sort of thing 24/7.  My mind had turned into swiss cheese by this point, and I had to take time off from developing.  It was almost a year before I went near the game again as the thought of working on this any longer was making things worse for me.  But I kept looking at it from time to time, and had it in my mind that I had gone this far and that I was going to finish this one way or another.

So my head was less melted at this point, so I decided to get back to work and get this finished. 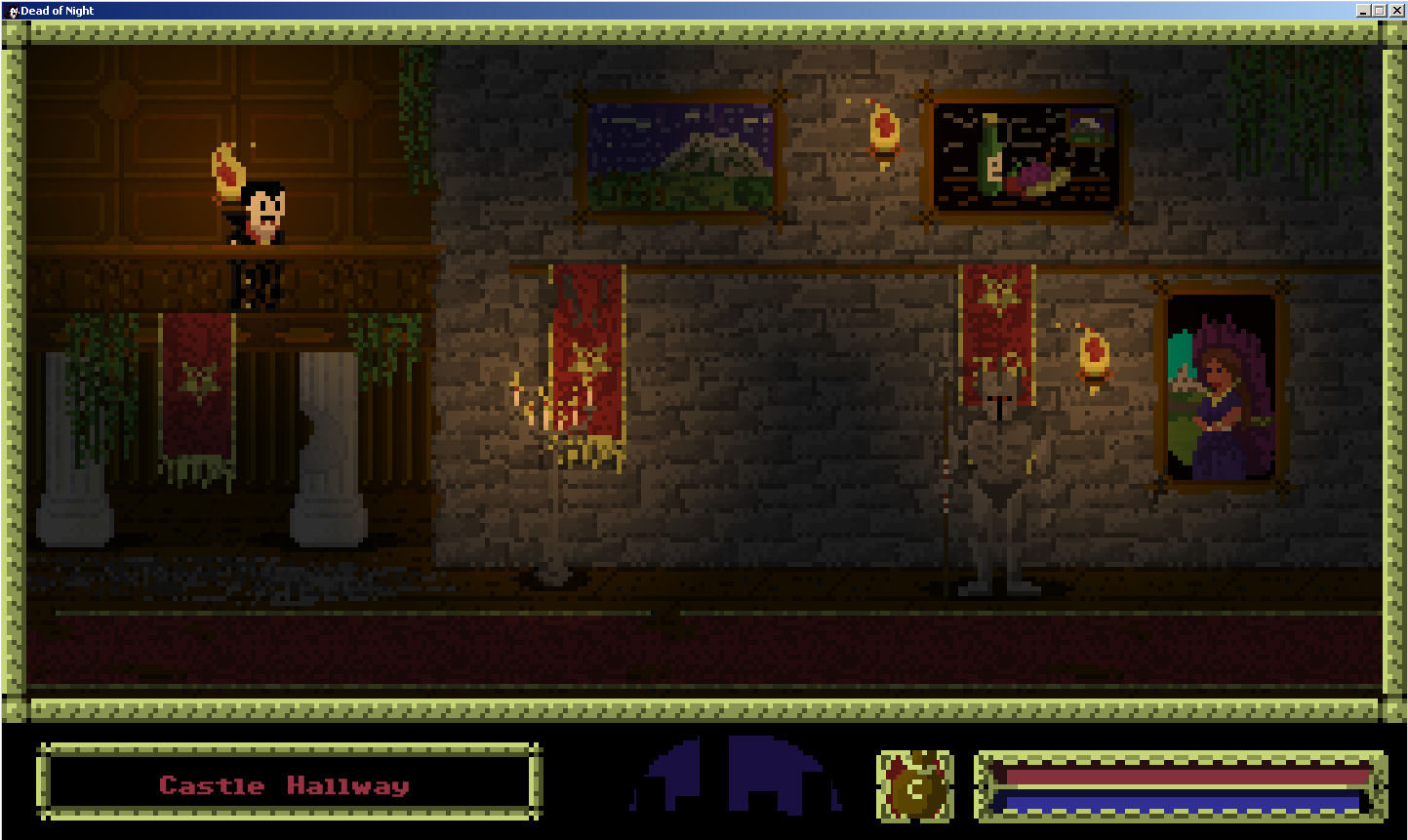 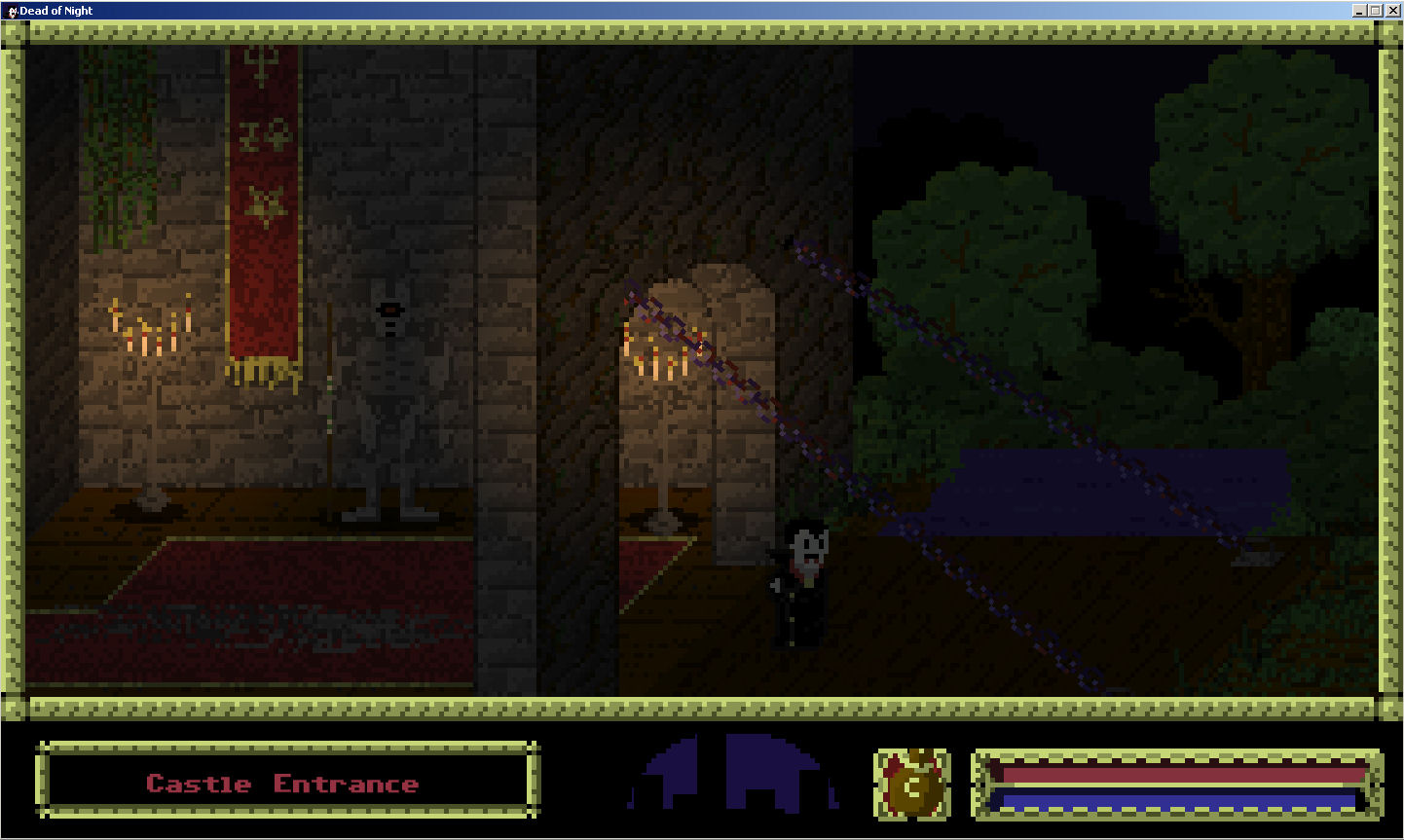 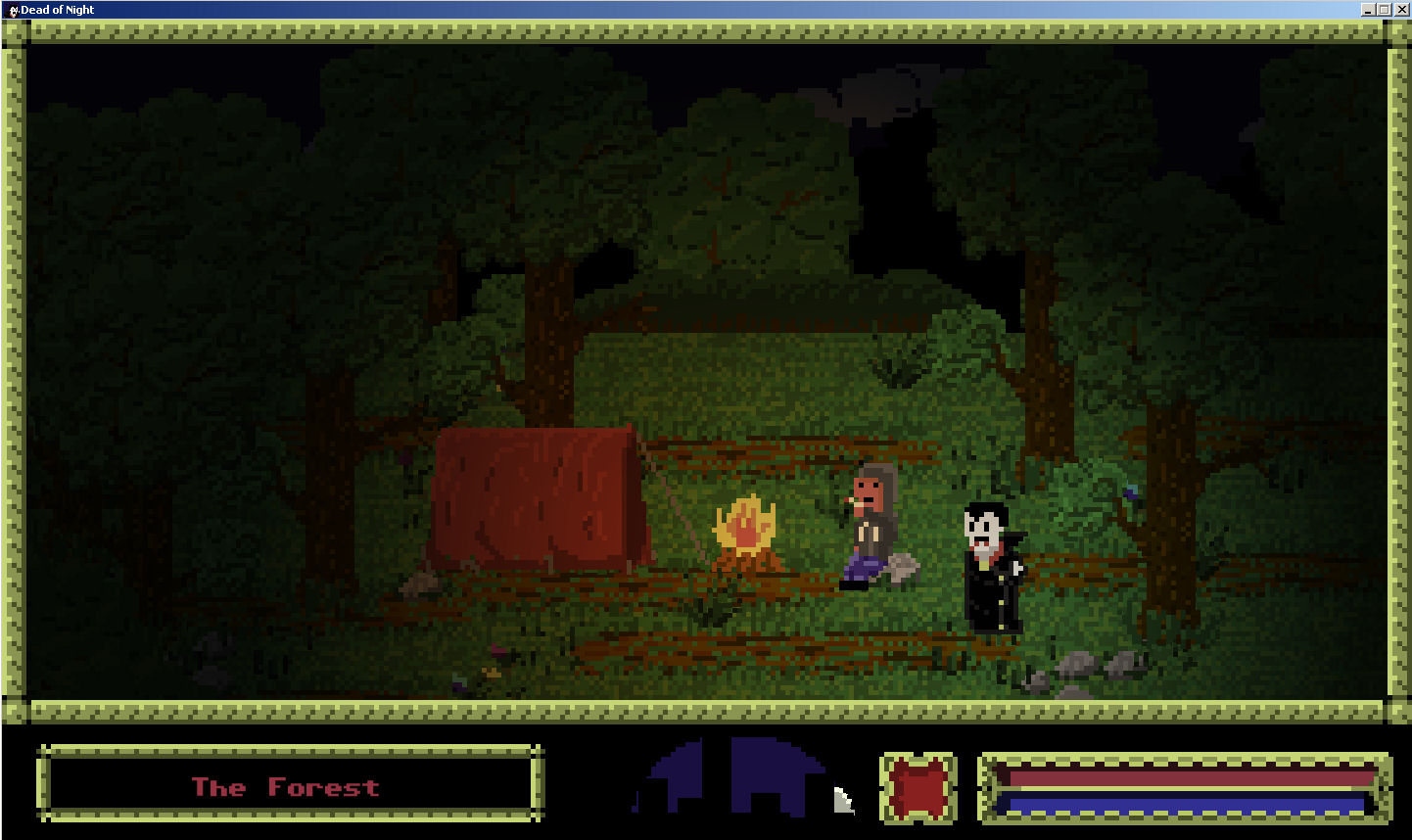 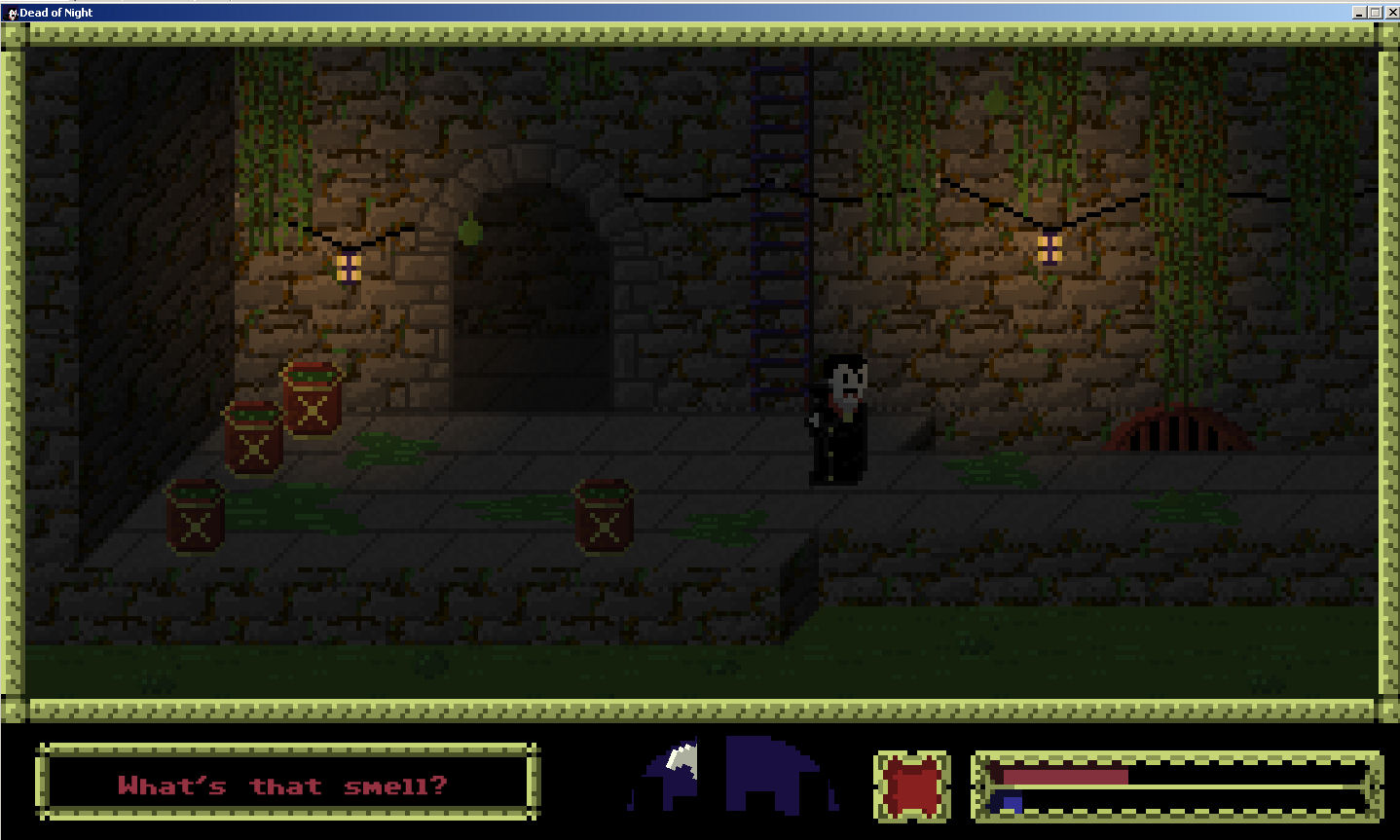 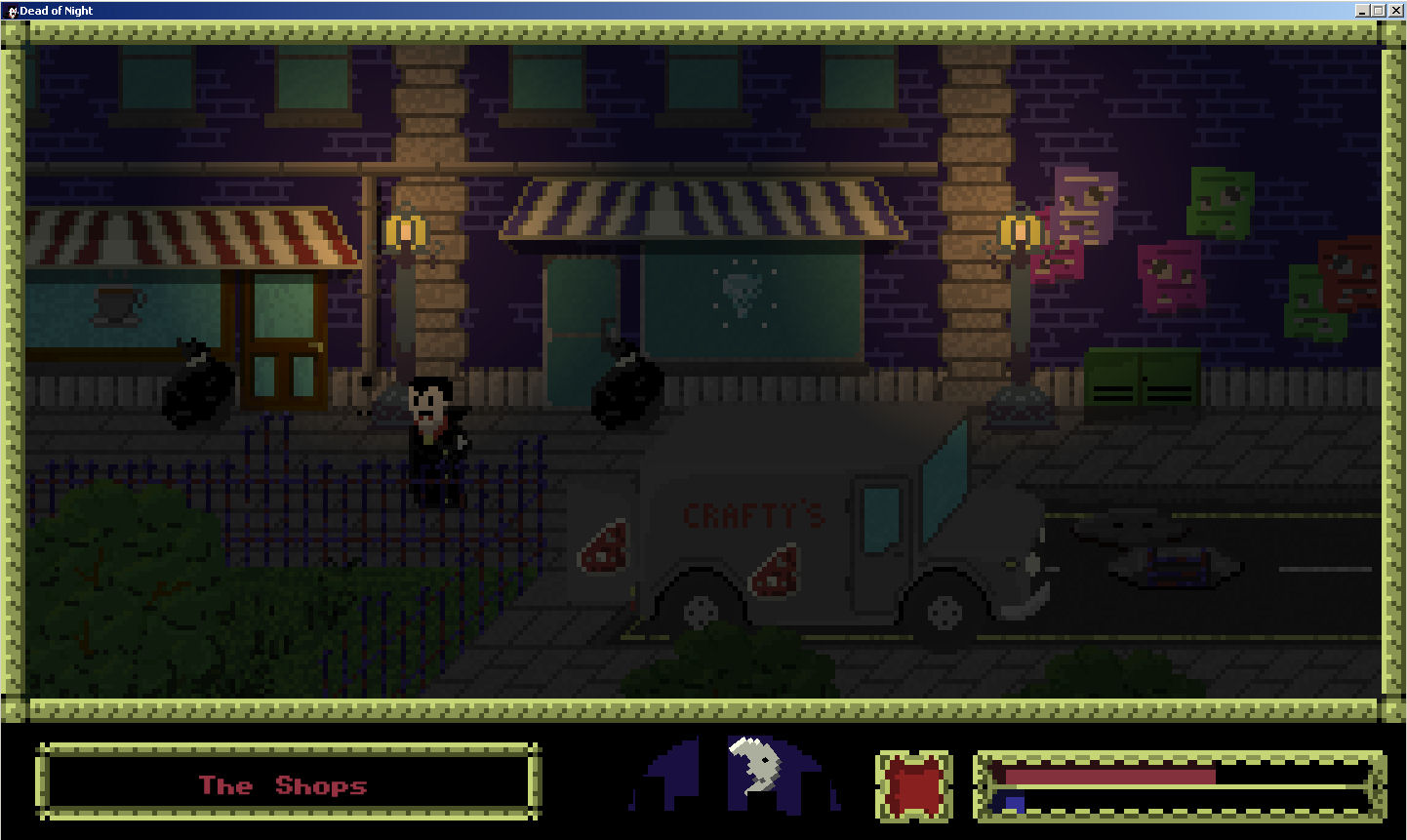 This was supposed to be the final version, and I'm glad it wasn't.  Music has been added and the layout is completely different to the previous versions, but there were a few big issues.  There was no save (I had no intention of putting a save system in to begin with but people wanted it in) and the other big problem was the people AI.  This version still has every screen being its own level in Gamemaker.  It can be completed, but after looking at it I decided that I was going to give it one last go and overhaul the map.  In the final version the town is one level, which it should have been at the very start and would have been less of a headache. 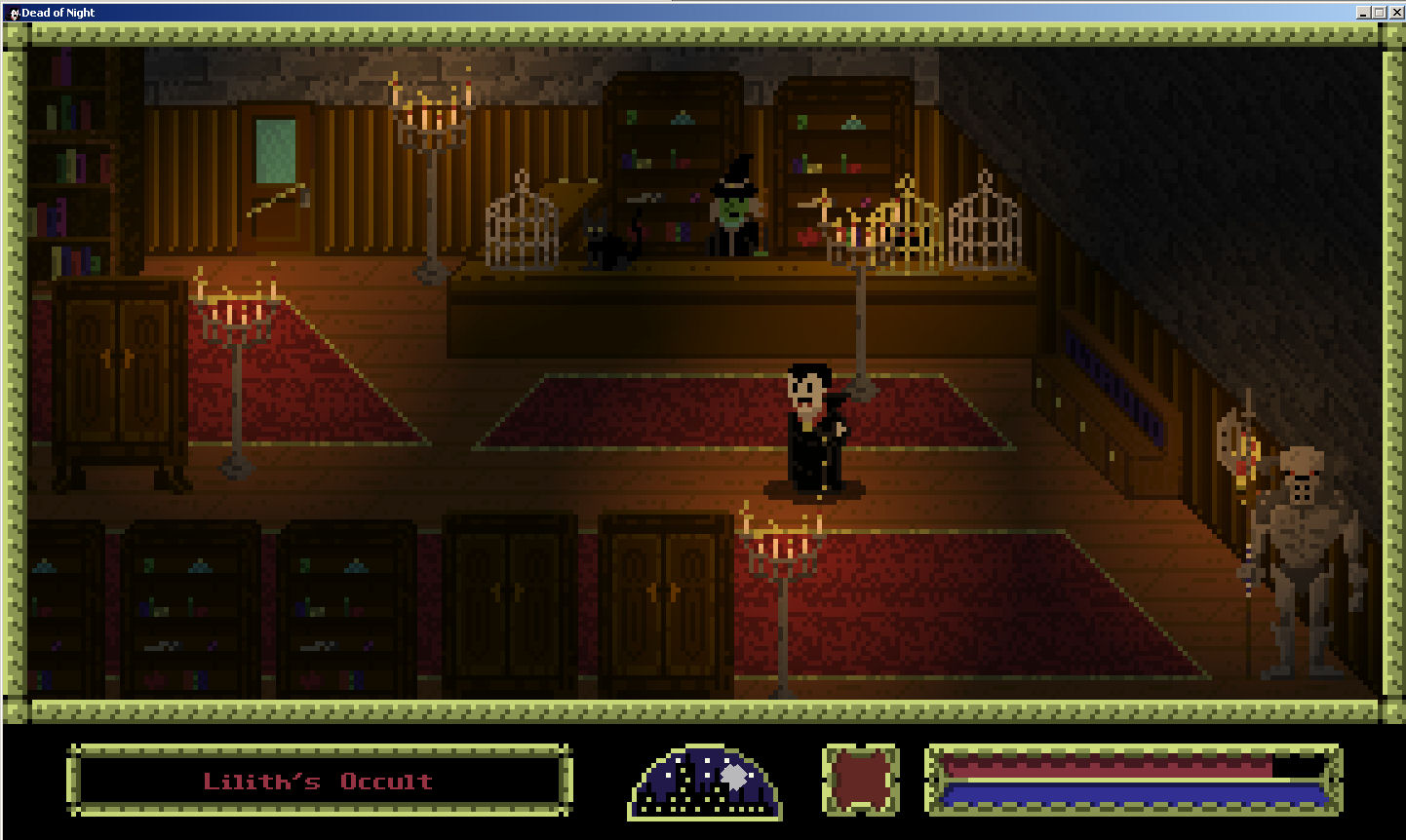 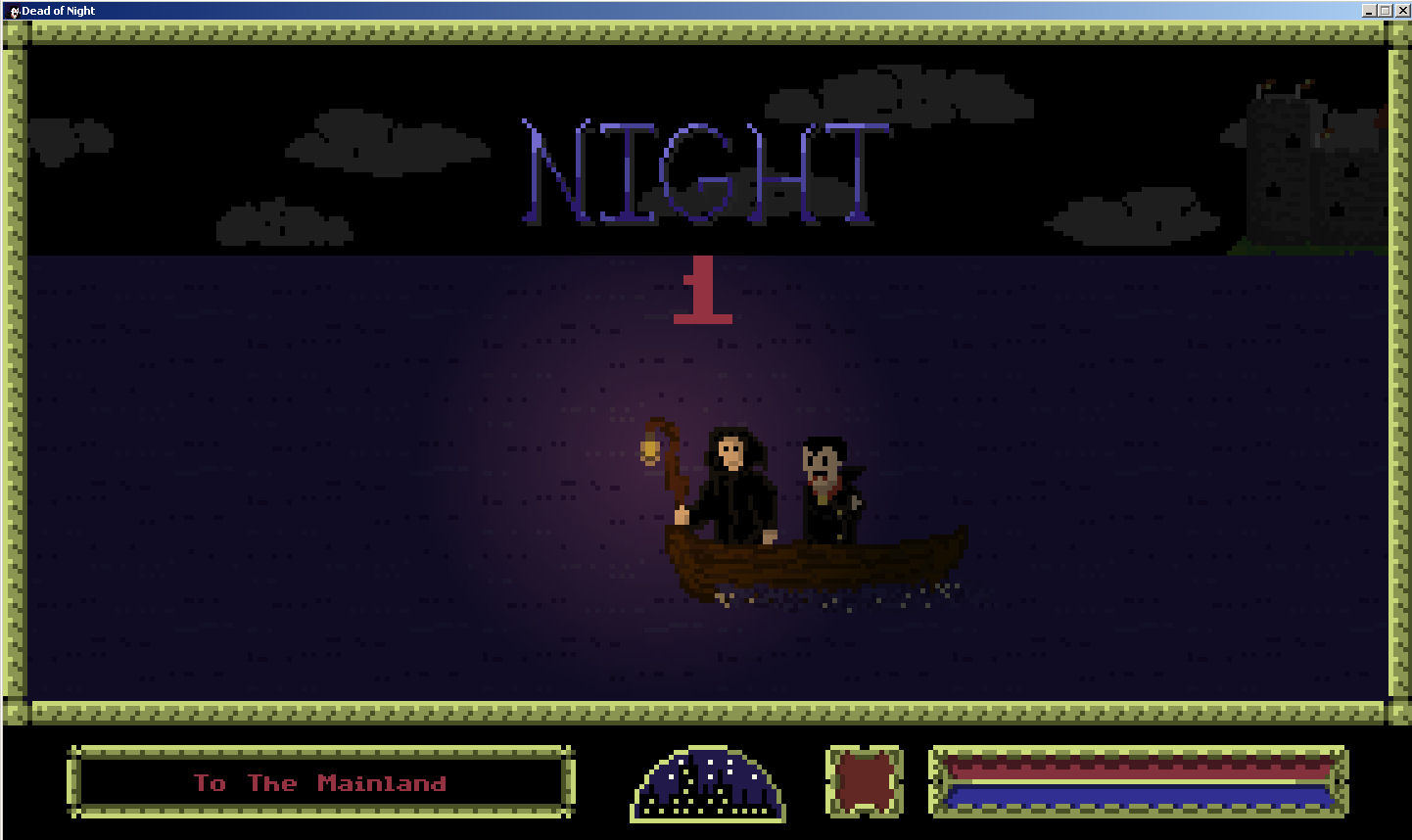 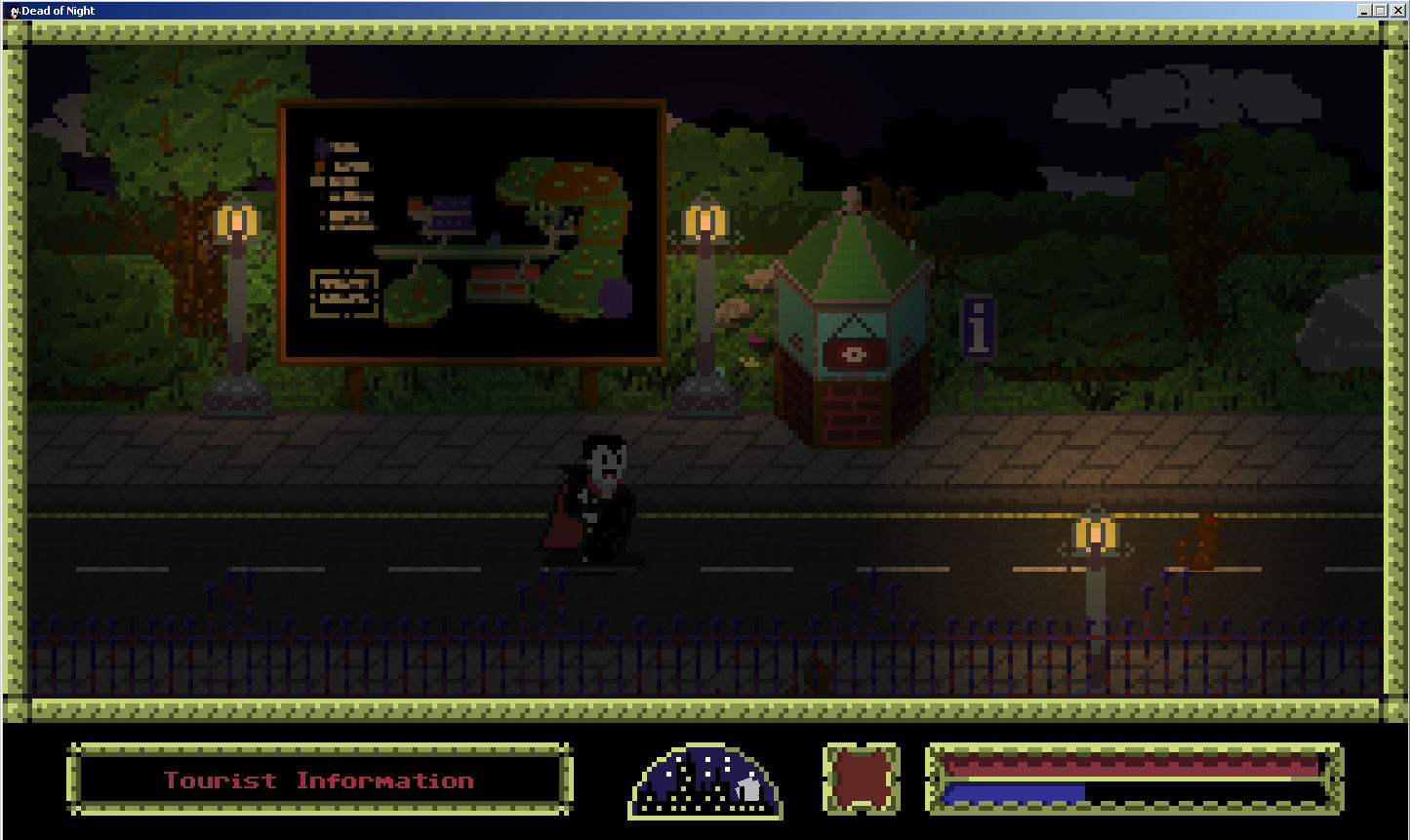 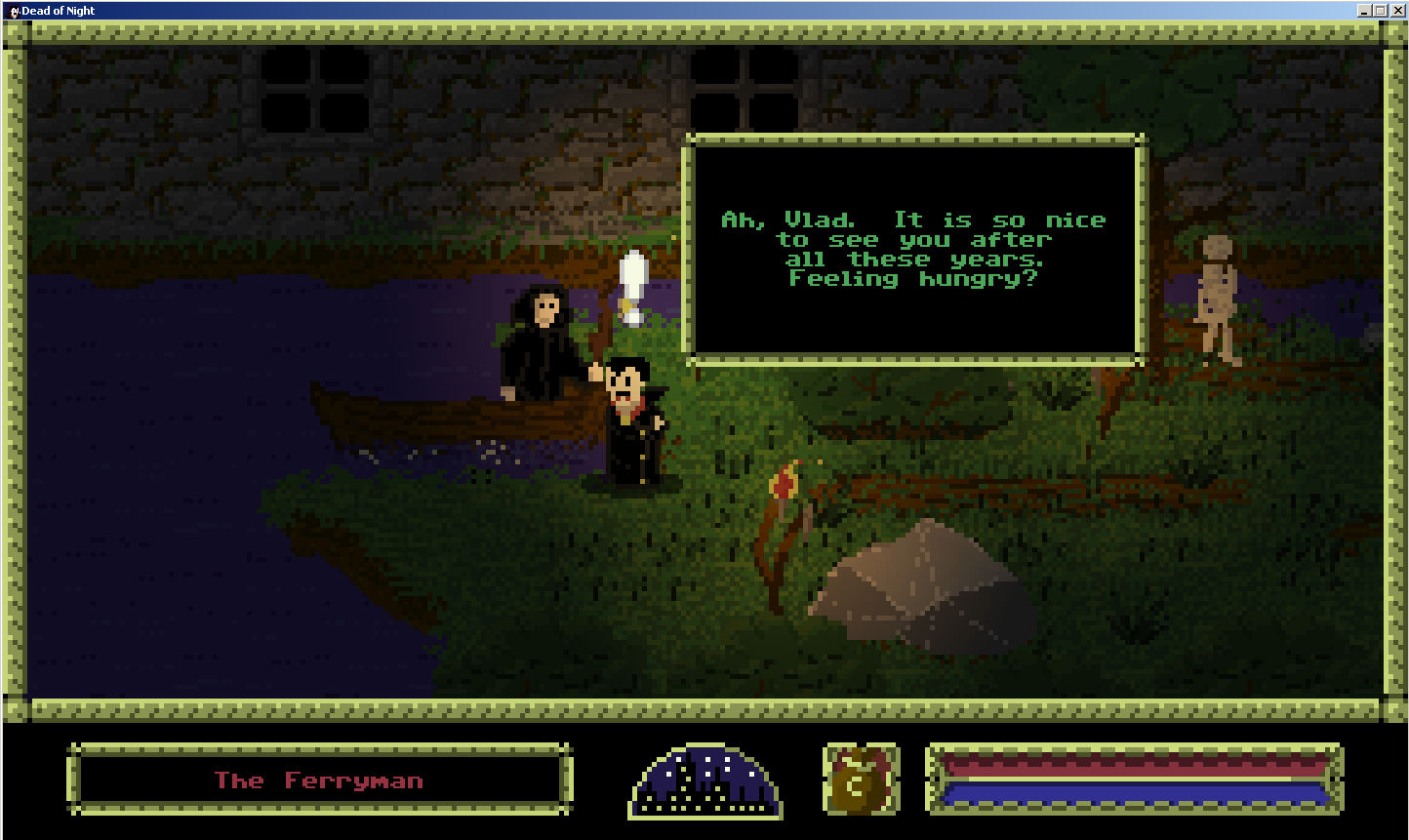 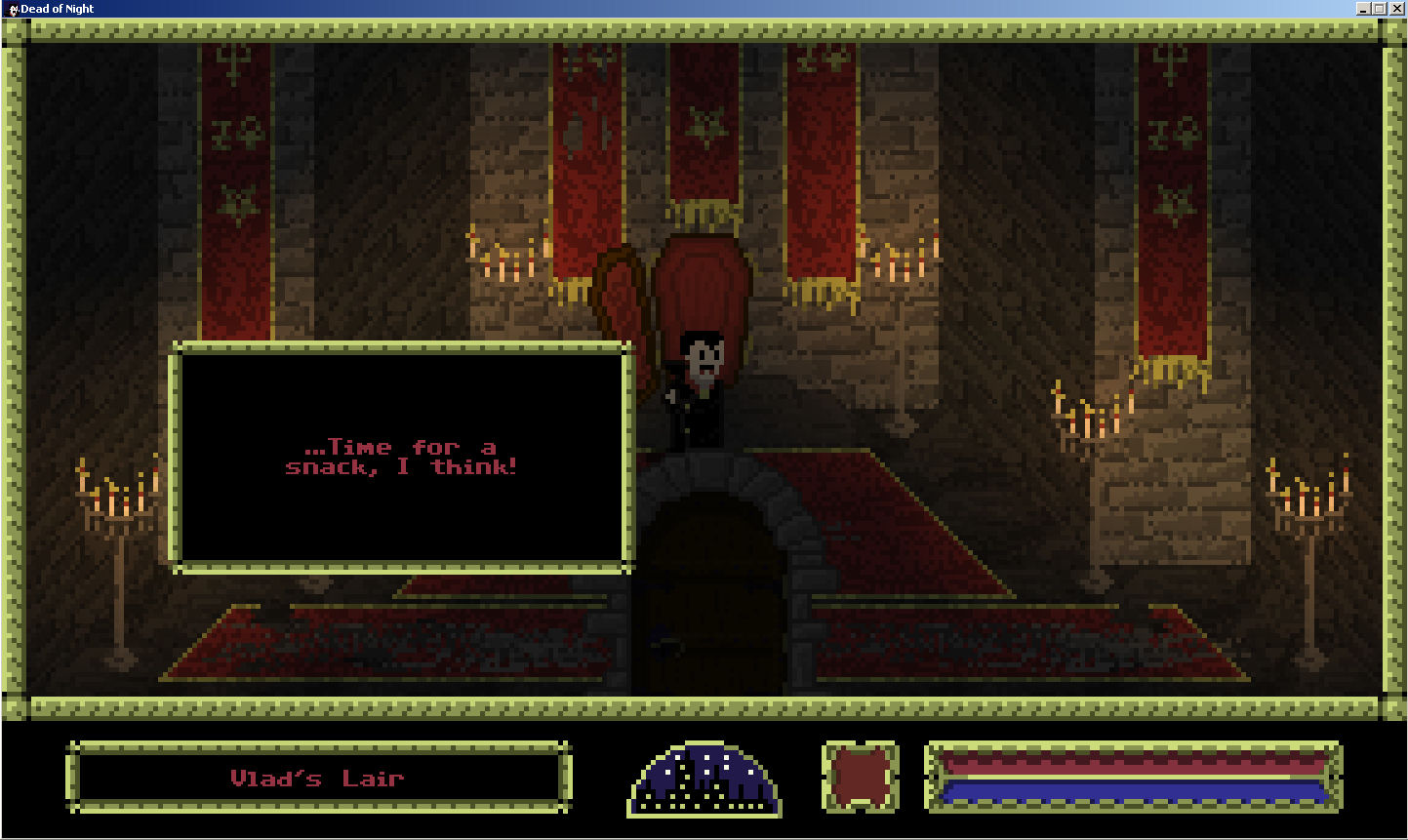 So as I've said the entire map required to be stripped out and remade.  The castle and the town are now on their own separate levels.  This meant I could use Gamemakers built-in path finding to make people walk around.  The entire games code is now a lot lighter and the size in general is a lot smaller.  The versions leading up to this had each graphic blown up from a 16x16 tile to an 80x80 tile and the room being the size of view.  Now each 16x16 tile is the original size and the view is now scaled properly, meaning that all the graphics now fit onto one texture page and reducing memory use.  It was stupid to have the graphics at that high resolution to begin with, but at least it was a learning experience.  A full soundtrack has now been implemented and sound effects.  I changed the music a little and up-ed the pitch on the main theme and added an extra instrument.

The game had a good number of bugs fixed since the initial release of the full game, and a save system and controller support added along with more music dotted around the map.  Afterwards I decided to add an arcade mode (Eat-Em-Up) where the goal was to stay alive and eat as may people as you can to get a high score.  Gold, money and diamonds appear at random as bonuses for the player.

Once that was implemented I decided to add a new quest to extend the lifespan of the game.  The goal of the original was to obtain your belongings from the townspeople.  The second quest is to steal the gold from the next town over, which only took around 5 months to implement.  Not bad considering how long was spent on the original.

And so there it is. Approximately 3 years in the making.  From not knowing a thing about making a game to a full game on sale on Steam, Itch.io, Gamejolt and Greenmangaming.  Now that it's finished I am going to start thinking about the sequel, which I want to be everything that I wanted to have in the game from the very start.  There is absolutely no way I am going to do this all on my own again.

I don't know if you realize it, but you have basically made a remastered version of Imagic's Dracula on the Intellivision game console circa 1983. This is in no way a bad thing and I think it's awesome tbh. It has the day/night cycle and you have to get back to the graveyard before the sun rises. It was quite innovative for its time. Yours is obviously more complex and prettier, but in the same vein (pun intended).

...and btw, instant purchase for me. Thanks for making this! 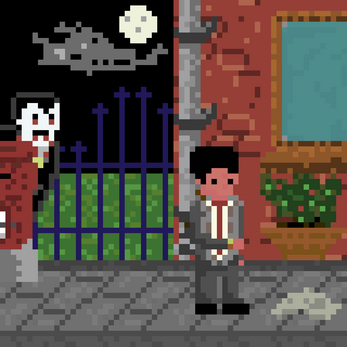